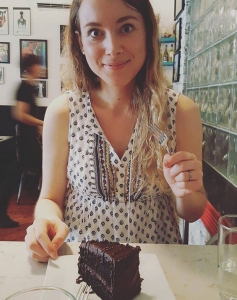 Hey there! Welcome to the newest incarnation of my food blog. “Oh Waffle” comes from an endearing nickname I was given by a close friend back in the day, but I also happen to quite like waffles, so here we are.

My culinary journey started as a way to impress a boy. I didn’t know the first thing about cooking, but picked up some vegetarian cookbooks and started cooking 5 recipes from them each week. It took me a year or two before I felt like I was competent in the kitchen, and I had so much fun with it that I started my first food blog to join a community and share my eats with others. The blog was called “The Real Meal”, and I maintained it until about 2015. Along the way, I developed something of a following and even had the opportunity to be a cookbook recipe tester. That blog is now defunct, but sometimes it’s nice to start again from scratch.

My first culinary school experience was at Living Light in northern California, a raw food school led by the wonderful Cherie Soria. Later, I spent six months going through the culinary program at The Natural Epicurean in Austin, Texas. It was rigorous and creative and immersive and I wouldn’t trade that experience for anything.

After finishing school in 2013, I decided to move to Toronto, Ontario and got a job at a vegan catering company. Though I massively improved my veggie-chopping skills through this endeavor, I realized that working in the food industry was not something I was passionate about, and have since hung up my apron.

My plan with this blog is to keep everything incredibly simple. I have many hobbies and interests, which you can read more about on my personal website allyvb.com – life as an entrepreneur and mom keeps me quite busy. I wanted to create a blog with no ads and no fluff – just easy, delicious and oftentimes healthy recipes.